A Games of Thrones Convention is using Kanban for Event Management!

What do Game of Thrones, Nordic countries and sci-fi gatherings have to do with Kanban? Meet Archipelacon, a first time sci-fi convention that will bring science fiction fans from all over the world to Finland at the Alandica Culture and Congress Center  for a four-day celebration of the fantastic arts this June. The keynote speaker of the event will be now infamous author George R.R Martin of …

Nominate someone for the Brickell Key Award

Nominations are now being accepted for the Brickell Key Award 2016. The award ceremony will be held at the upcoming Lean Kanban North America conference.

Fill out the form to nominate someone to be considered: Brickell Key Awards: Call for Nominations | Lean Kanban North America

The Brickell Key Award highlights excellence in our community, honoring two people (chosen from 6 nominees) who…

Lately, I hear these questions a lot - “Is Scrum better or Kanban?”, “What is more suitable for my project - Kanban or Scrum?”. These questions and sometimes the responses to them put managers in dilemma about which framework to embrace. Each has its own benefits and tales of success stories.

REPOST FROM APRIL 1: Welcome to the Board on the Wall Society

The Limited WIP Society announced today that it was changing its name -- and focus -- to The Board on the Wall Society. "It just seemed like where the market was going," said Janice Linden-Reed, administrator of the online community for fans of Lean pull systems such as Kanban.

Given the long history of proven benefits of limiting WIP (work in progress) to encourage flow and manage work, why change the name of the Limited WIP Society?  "Limiting WIP seemed too hard for people to…

Kanban is a very flexible methodology. I know that it is used by different type of organizations, for variety of reasons.
Now, I am looking for real Kanban examples - use cases form real companies and people, explaing how do they use Kanban and how do they benefit for it.
Some of those which I have found:

It is just over a year since my team began its transition away from Scrum using Kanban. It has seen many rewards and in my opinion it has been an unheralded success.
Seeing the successes and gains that my department has had in this transition, I frequently question why it is still a minority of software teams that even attempt this transition.
Obviously a lot of Scrum teams are getting a lot of value and producing a lot of value at high quality, so it deserved a closer…

Kanban in IT Operations

Kanban, successfully used in the automotive industry since the 1950s, has found its way into IT via 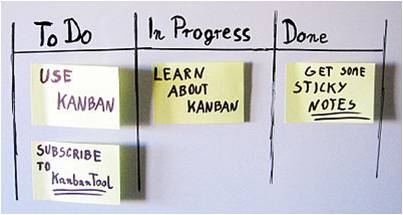 lean production and agile software development. There, among other things, used as a visualization aid in the context of Scrum and Xtreme programming, it has found itself increasingly used in IT Operations.

Several months ago the Lean Systems Society set out to develop a better idea of what really happens on systems projects. We sidestepped usual research instruments like questionnaires and interviews, which are biased by the expectations of the interviewers and interviewees, in favour of an approach that drew upon unprocessed information. That approach is the sense-making method and toolset created by David Snowden and the Cognitive Edge company, and the results have been…

We already do Scrum, but what is this thing called kanban?

There's been some recent discussion about how the Kanban method is often misunderstood as a development method that could be compared to Scrum, XP, etc. For people not familiar with the Kanban method, who are already doing Scrum - it makes sense to them to try to figure out what Kanban is by trying to understand the differences.

It may be comparing apples to oranges, but people do it anyway. I recently wrote a blog post that is a "frequently asked questions" of sort about Kanban vs…

The Kanban Kick-start Field Guide is a practical guide to help a team get in control of their current situation through the Kanban method. It gathers the experience from introducing Kanban to 50+ teams at Sandvik IT. Version 1.0 of the field guide, published under a Creative Common License, is now available. Get more details on leanagileprojects.blogspot.se…

Put the focus on Focus

I’m relatively new in my current job — working on 6 months now. I was speaking with another manager and the conversation drifted to the first changes my team implemented after I joined. But, as every good change agent knows, before you implement changes, you have to orient and observe.

When I came aboard, my team had a sizable backlog and every feature request and bug report was assigned out to members of my team of 8. New items came in daily and items were assigned as soon as they…

I just completed and posted the downloadable visual-notes for David's great Kanban book.

I hope you find them to be a useful and compelling reference guide.

I really enjoyed re-reading this book, for the purpose of creating these notes. And of course, I learned so much more with this second reading.

Also, I was challenged by a friend to work with some constraints to broaden my creative skills.…

Started my visual notes for the book, Kanban

I am re-reading the Kanban book to create my visual-one-page-summary-book-notes for this awesome read.

Thought I would share the real time development of this as I work on it over the next several nights.

You can see the first cut here.

HI all, A newbie here to what looks like a useful set of resources. I love creating visual-one-page-summary-book notes for great books on lean and business topics. I just completed the read for Impact Mapping. It's not Kanban, but I think it's an excellent way to start off project in a visual manner. View or download my digital, visual poster describing the book and steps to create an impact map. Cheers. -Todd

Kanban Resources website provides the online base of references to the best Kanban books, articles, blogs and presentations published by experts in Kanban methodology. Now the highest quality, up-to-date publications are available in one place.

Slack is not a dirty word

In a Kanban system you introduce WIP limits at each step of the value flow. This means, that if you get stuck at any one step in the flow and things are not moving forward, then all those who operate in earlier stages of the system enter a holding pattern. If you’re explaining Kanban to managers or executives, this is usually the point that makes them take a sharp turn off of the Lean highway! They mentally write off the whole concept of Kanban because “they don’t want anyone sitting idle.”…

Kanban Library - a collection of resources on Kanban

Kanban Library is out! :

"Understanding the basic elements of Kanban is a vital step in boosting your productivity with KanbanTool. Until now resources on Kanban have been scattered across many websites, and to help you with research, learning and sharing knowledge, we have decided to separate the wheat from the chaff and created a robust collection of links to the best resources from Kanban leaders and…

When I last posted on this blog, I was about to depart for the House of Mouse. Yep, DisneyWorld. The Magic Kingdom, to be precise. You might wonder why i’m blathering on about my vacation in my Kanban blog. However, an amusement park is the perfect place to find Kanban happening out in the wild. Talk about your EverydayKanban! For our case study, let’s look at roller coaster ride. But, first, a key to get our parallels drawn……